ABOUT A NEW PATH FOR MOM 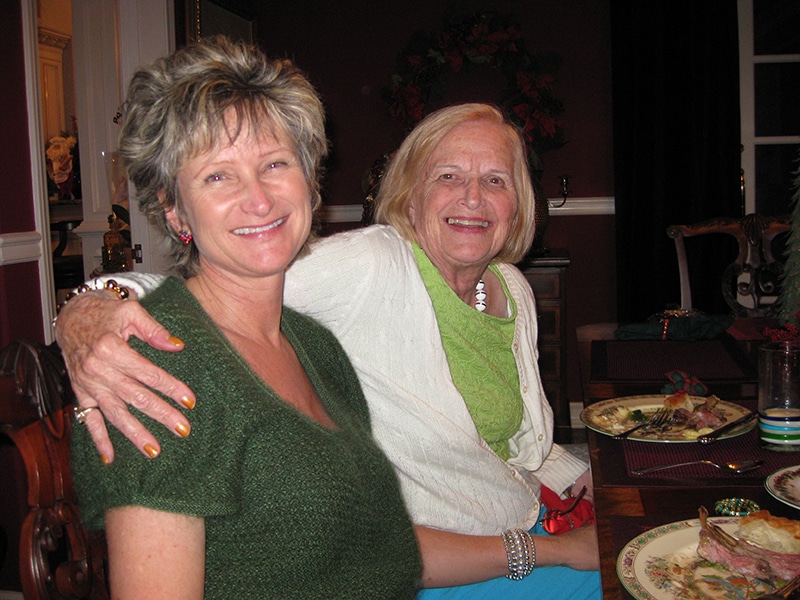 My name is Virginia Naeve. I grew up in a very happy home with my parents, Helen and Bob Simpson, and two younger brothers, Bob and Jim. I have been married to Bob, my loving and supportive husband, for 34 years. We have two grown children, Andrew and Allison, and we live in southern California.

Fourteen years ago, I knew almost nothing about Alzheimer’s disease. I knew it involved losing one’s memory but that was about it. I didn’t know that I was about to join the millions of people who have had to do their best to figure out how to manage this disease and care for someone who has it.

I have a lot to share about what I have learned and experienced and I plan to do that in this website and my blogs. Perhaps some of the stories that I share will help someone who is also going through this process.

There are different forms of dementia. Dementia is a symptom. Alzheimer’s is a cause. If there is such a thing, Mom had classic Alzheimer’s disease. My entire family including my brothers and their family members, learned a lot more than we ever thought we would about this disease. We lost our dear Mom on June 18, 2013.

For about the last ten years, I have been regularly attending events and seminars at the University of Southern California, the University of California Irvine, and the Alzheimer’s Association to hear about current research being done to either prevent or cure this disease. UCI has a wonderful institute called UCI MIND (Memory Impairments and Neurological Disorders) which is internationally known for its research accomplishments, clinic and community education and I am happy to be a member and supporter of UCI MIND. (www.mind.uci.edu).

My hope is that someday I will be able to add a wonderful page to my website that announces the discovery of a prevention or a cure for Alzheimer’s disease.

“The Many Faces of Dementia:  Where Do We Go From Here?”  conference held by the USC Alzheimer Disease Research Center and USC Memory and Aging Center, together with  Alzheimer’s Greater Los Angeles. The USC Radisson Hotel,  February 12, 2016.

“Keeping Your Brain Stronger for Longer,”  lecture and book signing by Tonia Vojtkofsky, PsyD., July 9, 2015,  Fairhaven, Mission Viejo, CA.  Her book features 201 Brain Exercises for People with Mild Cognitive Impairment.  Congratulations my friend on the publishing of your new book!

“This Is Your Brain On Music,”  presented by Dr. Daniel J. Levitin, best selling author and Professor of Behavioral Neuroscience and Psychology at McGill University, NBPL Foundation, March 20, 2015.

I was given the opportunity to be a guest panelist for an Aging & Dementia class,  taught by Dr. Maria Claver at California State University Long Beach, March 19, 2015.

“Strategies for Successful Brain Aging:  Your Brain on Caffeine and other Research News,” by Michael A. Yassa, PH.D., Assistant Professor, Neurobiology and Behavior, UCI, July 30, 2014.

24th Annual Southern California Alzheimer’s Disease Research Conference, “Countdown to 2025: Progress on Ending Alzheimer’s Disease,” hosted by UCI MIND and the UCI School of Medicine , together with The Alzheimer’s Association, held at the Westin Hotel in Costa Mesa, CA., September 20, 2013.

Conference, “The Many Faces of Dementia:  New Diagnostic Guidelines and their Implications for Care,”  hosted by the USC Alzheimer Disease Research Center and Keck School of Medicine, together with The Alzheimer’s Association,  held at the Davidson Conference Center, USC, March 15, 2013.