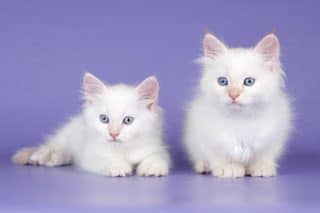 There were some lessons that I just couldn’t grasp.  One of those lessons was that learning to love and take care of a pet can be easy.  That is, unless you have Alzheimer’s disease.

In the early stage of Mom’s disease, we had two unsuccessful experiences with Mom owning a pet.  First was a kitten which almost immediately had to become a new pet in my household.  Then Mom bought herself a puppy.  Puppies are difficult enough even when you don’t have memory problems.

A few years later Mom had moved into her assisted living residence and they did allow pets under certain conditions, but why on earth did I feel that we should try again?  And why did I think that giving her TWO kittens would be a good idea?  I suppose I was still thinking that if Mom had kitties to hold, love and be responsible for, it might make her happy.

I went to a local pet store that was having a pet adoption day.  It’s probably easier to crack the nuclear code than it is to adopt two cats.  The questionnaire was many pages long, and they wanted to be sure we were responsible enough to be cat owners.  Adoption is not a one day process. They wanted to know how we live.  Do we agree to spay, neuter and vaccinate?  Does our whole family agree this is a good idea?  Do any of us have a criminal record?  Honestly, that was a question.  You get the picture.  I didn’t dare say that these two adorable kittens were going to live in an assisted living facility with my Mom who has Alzheimer’s disease.

After several days, the application was approved and the kittens were ours.  We were lucky that the caregivers where Mom lived had great attitudes about pets and they were happy to make sure the kitties were fed. Mom always had a lot of visitors, so we thought this would all work out.

After a few weeks we began to notice that Mom really wasn’t enjoying this pet ownership experience.  She didn’t seem to want to hold them or at least not for very long.  What were we missing?

My husband Bob and I went to visit one day and we asked, “Where are your kitties?”  Her response floored us.  Mom said, “What kitties?”

Oh man.  She had only two rooms in her little apartment and her cats were missing.  It seemed like forever, but we found one of them under her rocking recliner chair and that could have been a disaster if we sat in it.  The other kitty was hiding under the bed.

My pets have always given me so much joy and I really thought that Mom would get happiness from them, but the reality was that her brain was changing and pets didn’t make sense to her.  Clearly, it wasn’t fair to the cats and no one was benefiting.  Fortunately, we found a new home for them and they lived happily ever after.

Several months later, our dear private caregiver suggested I buy Mom a blue and yellow parakeet in a cute cage. Hard to believe, but I did just that.  Like I said.  There were lessons that took me a long time to learn.  Mom always had a great sense of humor and I think if she were here with me today, she would tell me that my brain had flown the coop!

BRIGHTFOCUS FOUNDATION is a nonprofit organization that supports research to cure various diseases including Alzheimer’s. They have a blog describing some of the benefits of pets at assisted living facilities.
http://www.brightfocus.org/alzheimers/article/alzheimers-disease-magic-pets