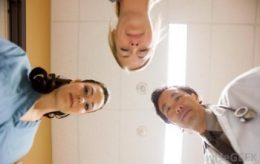 Well, who knew that Mom’s Alzheimer’s disease would lead to something called Vasovagal Syncope.  Thanks to Google, I found out that Vasovagal Syncope is the medical term for fainting or passing out. My husband always kids me and asks me where I went to medical school.

Mom went through several years of fainting episodes after developing dementia.  The first time it happened, Mom was having lunch in the assisted living dining room when she suddenly slumped over.  Out cold.  The policy of many residences requires an automatic call to 911 if someone passes out.  I was contacted immediately, raced over and followed the ambulance to the hospital. It was horrible following behind with it’s siren and flashing lights.  I had no idea what was wrong.

She was checked in to a room with a bed.  The emergency room doctors and nurses took a lot of tests.  Basically, after several hours they didn’t come up with anything.

The next time it happened, my brother Bob had taken her on a day trip to Catalina Island.  After a lovely day, they were waiting to board the boat home, and she passed out right on the dock.  Another time I had her in my car driving home from the grocery store, and suddenly she dropped her soft drink in her lap and slumped over.  Again, out cold.  Scared me half to death.   A few minutes later, she ‘came to’ and acted like nothing had happened.

For the next few years, there were many trips to the hospital emergency room with no answers.

Here is a description of what can cause fainting:  “Vasovagal Syncope can be precipitated by prolonged standing or sitting, hot environments, dehydration, systemic illness, emotional stress, fear, pain, venipuncture, or alcohol. “

Well, I usually ruled out several possibilities.  At each episode, she wasn’t standing or sitting for a prolonged period of time, no one exposed her to excessive heat, she wasn’t ever in the process of getting blood drawn, and she wasn’t a drinker.  We used to laugh about that one.  She told me that when she was young and working at Cornell University, she went to a party and had one too many Bloody Marys.  That was it.  Honestly, from then on she stayed with Ginger Ale as her social drink of choice.

Having Alzheimer’s did cause her stress, but I think the general and rather vague conclusion was always that she was dehydrated.  She wasn’t a good water drinker during the day.

As I research the topic now, I see several references to the connection between fainting and the Alzheimer’s drugs called cholinesterase inhibitors, including Aricept.  Mom was on Aricept and I had no idea at the time that fainting could be a side effect of that drug, but if I had I most likely would have taken Mom off of it as I questioned the effectiveness anyway.

Her problem with passing out eventually diminished but it was several years.  We tried to make drinking appealing with things like cute glasses, flavorings and straws, but it wasn’t easy to make her drink and stay hydrated when she didn’t want to.

I do know that doctors don’t always come up with answers to our health problems.  Along with possibly being dehydrated, my own strong suspicion was that while Mom’s brain was being ravaged by the impact of Alzheimer’s disease, things were misfiring and one of the results was for her to faint.

If Vasovagal Syncope seems to be something that your loved one with Alzheimer’s experiences and no one can figure out why, my advice is to try to see that they stay hydrated and if applicable, consult a doctor about their use of cholinesterase inhibitors.  Keep in mind that injuries from falling is something to be avoided.

Good thing I don’t charge much for my medical advice!

1.  There is a study published in the JAMA Network called,  “Syncope and It’s Consequences in Patients With Dementia Receiving Cholinesterase Inhibitors.” https://jamanetwork.com/journals/jamainternalmedicine/fullarticle/414936?resultClick=1

Here is their Conclusion:

Use of cholinesterase inhibitors is associated with increased rates of syncope, bradycardia, pacemaker insertion, and hip fracture in older adults with dementia. The risk of these previously underrecognized serious adverse events must be weighed carefully against the drugs’ generally modest benefits.