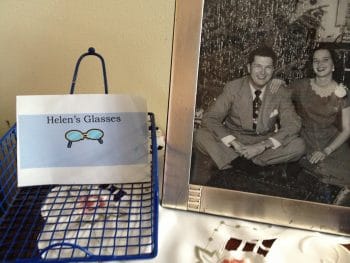 When you have trouble seeing clearly, a visit to the optometrist is usually a simple matter. That’s true, unless you have Alzheimer’s disease. Vision is just one of the issues that becomes complicated when brain failure is involved.

I was getting calls from Mom on a daily basis about her missing eyeglasses. She was sure they were  stolen. I would try to tell her over the phone to reach down the side of the recliner chair cushion to see if that’s where they were, but she was always sure they were gone for good. Each time, I would go over and after a bit of a hunt, I would find them.

I began to wonder what would happen if her glasses really did get lost or broken. First, I made a basket to keep at the side of her bed as a reminder to put her glasses there at night.  Then, I made an appointment for her with a local optometrist and thought it would be easy to have her eyesight examined, get a prescription for glasses, then buy several pairs to have on hand.

We were called in to the exam room and Mom took a look at all the equipment. I could see immediately that she was getting uncomfortable. Fortunately, the person who was to administer the eye tests was very kind and I took her aside to tell her that Mom had Alzheimer’s. She was sympathetic but I could tell that she hadn’t had this situation before.

Mom found the questions and requests difficult and confusing. For example, she was asked to read the letters on the wall that were graduated in size and she didn’t know where to start. The woman told Mom to read them. Read? They aren’t words, they are just letters. Then, Mom was asked if she could see the number that was hidden in a bunch of dots. Oh dear. Even being asked to put her chin in the chin rest for the various eye tests was a little scary. I was feeling so badly for her. It wasn’t long before the technician looked at me and said, “Well, we will just do the best we can.”

I’m still not convinced that the eyeglass prescription that we received was really as good as it should have been. I would have felt better if they just made several pairs from her current glasses, but they wouldn’t do that. I had no idea how old her glasses were.  In California, there is a law that if the prescription is older than two years, they are not allowed to use it. That law varies state by state, but in a quick search, Florida was the only state I found that permitted a prescription to be older than two years.

At that time, I didn’t know that many vision problems caused by Alzheimer’s were in Mom’s future. Peripheral vision shrinks and eventually they have the equivalent of tunnel vision. Depth perception is affected and differentiation between similar colors is diminished.

Vision difficulties caused by Alzheimer’s cannot be corrected with eyeglasses, but getting a good eyeglass prescription is certainly the best thing you can do in the meantime. If dealt with early, vision problems can be less of an issue down the road.

I had a lot to learn about vision and Alzheimer’s.  Hindsight really is 20/20.

Have several pairs of glasses for your loved one in case they are lost or broken.  It’s preferable to make an appointment for an eye exam in the beginning stages of dementia. As the disease progresses, it will become more and more difficult for them to answer questions that are necessary to get an accurate eyeglass prescription.  Fear of the exam is also an issue.

This is a good article about the effects of Alzheimer’s on vision:  http://psychcentral.com/lib/improving-alzheimers-and-dementia-care-the-eyes-have-it/